We all know that fish oil is good for us.  It can provide high levels of omega-3 fatty acids called EPA and DHA which are essential to good health. In recent times, scientists have uncovered many potential benefits of fish oil, some conclusive, others pending. Some of these benefits include:

In the old days we would have gotten sufficient omega-3 by consuming fresh fish, but even our grandparents were accustomed to taking cod liver oil on a daily basis, and that was a good source.  More recently, krill oil has become available, a product that excited both nutritionists and scientists. But was it the next best thing and what could it offer – potentially – that fish oil couldn't? Well, like fish oil, krill is also a source of essential fatty acids and omega-3. The main benefits of Krill oil supplements over fish oil are that they're supposed to be more potent. Because of this, krill oil capsules are a lot smaller than fish oil. If there is a downside it would be that Krill oil supplements cost more than the cheaper competition. Even so, that's only a downside if the product is overhyped; so is it?  Do we even need to supplement with omega 3?

The truth is, we need essential fatty acids for good health.  Every cell in your body is surrounded by a cell membrane made up of these fats.

EFAs are termed “essential” fats because the human body cannot manufacture them itself. This means we have to get them into our system through diet. The problem is that the typical diets of today don't contain enough omega-3 fatty acids to serve our needs. This is where supplements come to our rescue. Without getting too scientific, here's a quick breakdown of how omega-3 helps us to function:

You might be wondering why this even matters. It matters because the medium and long term health consequences of this imbalance can result in serious health conditions later on in life. This includes things like heart attack, cancer, insulin resistance, depression, stroke and premature ageing to mention just a few of many.

Estimates suggest that today that 4 out of 5 Americans do not eat enough fatty fish to get the required levels of these fatty acids.  Even if they did eat enough fish, with increasing levels of dangerous heavy metals filling our oceans and getting into the food supply, many people are turning to supplemental forms of fish oil, but where should we be getting our omega-3 from?

Krill oil has gained a lot of its popularity because it contains an antioxidant called astaxanthin. It's what gives crustaceans like Krill, crabs and lobsters their golden color. Aside from the potential benefits of this antioxidant for humans, the oil derived from krill also has a higher concentration of EPA (polyunsaturated fats vital for the health). Those who take krill oil supplements supposedly don't suffer with fish-burps that often occur after taking traditional fish oil capsules.

It's true that krill oil hasn't had extensive studies like fish oil, but so far it has shown a lot of promise. For example, there have been some great results with lipid lowering and arthritic pain reduction. There are plenty of known benefits for the more traditional fish oil supplements, no one can deny that. It's just that krill oil, so far, may turn out to be the better supplement for the reasons mentioned above.

Let's look at the main differences between fish oil and krill oil that we know so far.

1. Where do these oils come from?

Fish oil is primarily extracted from cold water oily fish like herring, salmon, mackerel, sardines, anchovies, cod and halibut.  It can also be extracted from seal and whale blubber, so read the labels.  These animals are all a fair way up the food chain, and this can lead to increased levels of mercury and other toxins.

Krill oil is obtained from a tiny shrimp-like crustacean living in the clean waters of Antarctica.

2. EPA, DHA and the phospholipid benefit of krill oil

Fish oil can contain around 30% EPA and DHA.

By contrast, krill oil only contains around 14% EPA and DHA omega-3 fatty acids.  However, their structure (containing a phospholipid) makes them far more easily absorbed by the gut.  Clinical studies have shown that krill oil has a higher bioavailability than fish oil, meaning your body gets more EPA and DHA than the corresponding amount of fish oil.

Fish oil is very low in antioxidants, and is itself prone to oxidation.  When oil oxidizes, it become rancid and loses all of it health benefits.

Krill oil is rich in an antioxidant called astaxanthin which gives krill oil its characteristic red colour.  It also contains high levels of vitamin A, E and D.  Vitamins A and E are themselves antioxidants, but astaxanthin is around 300 times more potent in the fight against free radicals.

4. Are these oils coming from sustainable fishing stocks?

Large fish that are used in the production of fish oil are becoming increasingly fish out, with current fishing quotas being unsustainable.

By contrast, there are huge stocks of krill, and the fast reproductive cycle ensures that krill stocks will provide sustainable yields for both human and natural predators.  With krill biomass estimates of several hundred million tonnes, and human harvesting of well under 1 million tonnes per year, krill is easily sustainable.  It is also looked after by the Commission for the Conservation of Antarctic Marine Living Resources (CCAMLR).    CCAMLR put a limit on krill catches of 6.6 million tonnes per year, but we harvest far less than this.

5. Impact on the marine ecosystem

Ecosystems are fragile.  If something becomes out of balance, there are knock-on effects.  With overfishing on the the scale we have today, other marine species are endangered and this will ultimately reduce the numbers of top predators in the sea.  There are estimates that 300,000 whales and dolphins die each year as a consequence.

By contrast, krill oil production uses a tiny fraction of the krill biomass available to marine creatures.   The amounts we are talking about are so small that whales and other cetaceans will not be impacted in any way.

6. Contaminants in the oil

Due to the pristine waters of Antarctica, krill live in relatively clean water without the hazards of heavy metals and other toxins that humans pump into the oceans.  The fact that they are also at the bottom of the food chain, eating plankton in the surface waters, means they don't accumulate these toxins like predators higher up the food chain (fish).

Omega-3s from fish oil or krill oil provide us with a lot of health benefits like reducing the risks of heart attack and stroke.  They can both effectively thin the blood (take care if you are taking other blood thinners like aspirin or warfarin).  However, krill oil has additional benefits:

I've heard rumours that krill oil does not cause the unpleasant side-effect of fishy burps that is associated with fish oil.  I do actually get small krill oil burps, but they are not as bad as fish oil.  If you have taken both krill oil and fish oil in the past, perhaps you can leave a comment below and let me know if this rumour is in fact true for you.

2 thoughts on “The Differences between Krill Oil & Fish Oil” 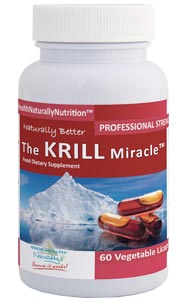